HomeBiographyGodwin Emefiele Biography: Profile and Net Worth of the CBN Governor
Biography

Godwin Emefiele Biography: Profile and Net Worth of the CBN Governor

Godwin Emefiele (born 4 August 1961) is a Nigerian banker best known as the Governor of the Central Bank of Nigeria, a position he has held since since 4 June 2014. He has an estimated net worth that is above $2 million.

The position Godwin Emefiele occupies makes it unthinkable for his name to slip through the cracks. He has served as an educationist and economist, worked with various banks before becoming the Governor of the apex monetary bank in Nigeria.

Here, the succeeding lines will try to unpack the personal details of Emefiele’s childhood education, his career ascent over the years, how he accrued such substantial net worth, and some misfortunes surrounding his work.

Godwin was born on 4 August 1961 in Lagos, Nigeria. Like most people born in the cosmopolitan Southwestern state of the country, he speaks Yoruba such that one could conclude that he is of Yoruba extraction. However, he hails from Ika South LGA, Delta State, of the south-south geopolitical zone of Nigeria. There is scarce mention of the name of his parents or siblings in the public domain.

Regardless, he is married to Margaret Emefiele, and they are proud parents of two children, Godwin Jr. and Andrew Emefiele. He began his educational pursuit at the Government Primary School, formerly Ansa-U-Den Primary School, Igbosere, Victoria Island, where he obtained a Primary school leaving certificate in 1973. He completed his secondary education at the Maryland Comprehensive Secondary School, Lagos, in June 1978.

By 1984, he bagged a degree in Banking and Finance from the University of Nigeria, Nsukka, and a Masters’ degree followed in 1986 from the same University. 2004 saw him at Stanford University, Harvard University, where he undertook Executive studies. In 2005, he took a similar executive study at the Wharton School of Business, focusing on Negotiation, Service Excellence, Critical Thinking, Leading Change, and Strategy.

How Godwin Emefiele Accumulated His $2 Million Net Worth

There are conflicting reports on the exact net worth of Godwin Emefiele. While other sources maintain that the economist has amassed wealth as low as $2 million, others attest that it is as high as $50 million. In whatever case, the CBN Governor serves as one of the vital people in the Nigerian economy and has generated massive wealth over time. The 61-year-old has worked in the private and public sectors for decades. Here’s every way Emefiele has made his wealth.

He Had a Career as a Lecturer

Godwin Emefiele stepped on his career path first as a lecturer in Mathematics of Finance and Insurance at the University of Nigeria Nsukka (UNN) and the University of Port Harcourt. Although there is no fact about his salary at the time, there is a certainty that the banker’s earnings and experience have contributed to his net worth and exposed him for later works.

Even though he will soon leave the walls of the classroom to join the banking world, Godwin Emefiele still finds himself speaking at convocations such as the University of Lagos’ 51st convocation lecture. In addition, he lectures at several seminars in different parts of the world, mostly on topics related to finance and economics.

He Served As the Managing Director of Zenith Bank

Godwin Emefiele began his career in the banking sector at the Nigerian American Merchant Bank, otherwise known as the First Bank of Boston. He also served as Director of ACCION Microfinance Bank Limited. In 1990, he transferred his services to the newly founded Zenith Bank. His efforts at building the bank to be one of the most prominent financial institutions in the country cannot be forgotten in a hurry.

He made a sharp ascent in the bank, thus becoming its Executive Director in 1996 and the Deputy Managing Director in 2001. In August 2010, Godwin Emefiele was appointed as the Group Managing Director and Chief Executive Of Zenith Bank and its subsidiaries in Ghana, Sierra Leone, Gambia, South Africa, China, and the United Kingdom.

In his years at Zenith Bank Plc, he displayed uncommon managerial and leadership skills with the aid of information technology to position the bank on a pedestal that qualifies it to compete favorably with big names in the banking sector. In this regard, he increased the investment standard of the bank. With the investment growth came an increase in the profits of the bank.

A CBN Update in 2020 conveys that Emefiele was one of the vital people who saw the growth of Zenith Bank from startup to one of Nigeria’s largest banks with over 9,000 staff, about $3.2 billion in shareholders’ funds. It is also a bank with subsidiaries in Ghana, Sierra Leone, Gambia, South Africa, China, and the United Kingdom.

Godwin Emefiele Has Been the CBN Governor Since 2014

Emefiele launched into the public sector on 3 June 2014 as he was appointed the 11th CBN Governor after Sanusi Lamido Sanusi. He was reappointed for a second term in May 2019, making him the first Governor of the apex bank ever to serve two terms.

Since it is known that the CBN is one of Nigeria’s parastatals with the highest salary schemes, questions such as how much the CBN governor, Godwin Emefiele, earns often come up. Although the Governor of the Central Bank’s salary seems shadowy, there are suggestions that it is pegged at about 9 million Naira monthly.

He Has Been Linked to Other Businesses, Which May Have Added to His Wealth

The information to clarify if Godwin Emefiele has other businesses or investments is scant. However, on 7 November 2017, Premium Times reported that Godwin Emefiele is a shareholder in at least three companies and was still linked to one until July 2017.

According to the report, the Lagos-born economist is partly the owner of an offshore firm, Vitesse Asset Management SA, owning 50,000 bearer shares with Jim Ovia. This company started in Switzerland in  2007.

Allegations of Mismanagement of CBN Funds and 500 Billion Naira Theft 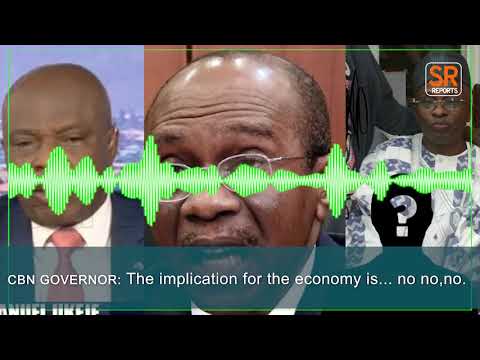 Shortly before his confirmation by the Senate for his second term in May 2019, a damning audio conversation got into the public domain. The audio conversation, which was made public by Sahara Reporters, contains an exchange among the Deputy Governor, Edward Lametek Adamu, the Director of Finance, Dayo Arowosegbe, and Emmanuel Ukeje who serves as an aide to the CBN governor.

The trio was in the conversation, racking their brains to find out how to conceal a botched private investment that has seen the apex bank losing N500 billion. Strong calls came from some quarters demanding his sack on the heels of this leaked conversation. In response, the Director of Corporate Communications, while admitting that there was a conversation among some of the executives of CBN, said that what was published by the media outlet is a “selective conversation” that did not capture everything.

In addition, he denied any private investment anywhere and any loss of money from the coffers of the apex bank. Consequently, the President did not yield to the appeal for the sack of Godwin Emefiele and reappointed him for a second term.

In 2020, Godwin Emefiele worked out a five percentage import duty and levy waiver for the importation of tomato paste for Sonia Foods for a period of two years. This company is purported to be owned by Nnamdi Nnodebe, a said relative of the CBN governor.

Sahara reporters, who published the News, pointed out that the actions of Godwin Emefiele defy government policy enacted through the Ministry of Industry, Trade, and Investment in 2017. This policy placed a ban on the importation of tomato paste or powder. Emefiele was thus accused of sabotaging the government’s policies against food importation while he gets some forms of reward from those he assists.

The Governor of the CBN was summoned by Senate Public Accounts Committee (SPAC) in 2021 to clarify some funds that were not accounted for. This sum, to the tune of $9.5 million, is an interest accrued from Petroleum Profit Tax (PPT).

The Petroleum Profit Tax (PPT) accumulates from rents, royalties, prospecting and exploration leases, and profit-sharing elements from oil mining. This amount is supposed to be lodged in the federation account. After failing to honor the invitation, the Senate Public Accounts Committee gave Emefiele a 72-hour ultimatum to appear before it.

The Ban on Cryptocurrency

It is an effort to assist the government in the fight against terrorism that such a decision was taken to block the flow of finances that enables terrorism in the country. Hence, the ban on cryptocurrencies like Bitcoin, Litecoin, Binance, and Ethereum, which he describes as a currency from thin air.

The announcement of the introduction of eNaira, which is a digital currency to be regulated by CBN, came some months after he outlawed cryptocurrency and prohibited Nigerian banks from making transactions in them. He explained that the Central Bank Digital Currency (CBDC) or the eNaira was not a replacement for the physical currency.

This did not sit well with some who perceived the CBN’s preference as deliberately shunning Nigerian blockchain experts. Although the CBN was quick to defend its choice of Bitt Inc. with the claim that every contractor was given a level playing ground to bid for the contract, people were still dissatisfied.

The 61-Year-Old was Involved in Forex Controversy

When he came on board as the Governor of the CBN in 2014, Emefiele oversaw the robust policy that saw them enriching the foreign exchange market with billions of dollars to assist operators of Bureau De Change in the country. This was how it worked. Each week, the CBN reportedly sold out $50,000 to each operator. With time, the amount was reviewed downward to $30,000, then $20,000 as the number of operators soared.

The curiosity of the CBN governor was said to have stirred as the number of operators requesting forex license up ticked, so he dispatched a team to investigate the business. The result of their findings was astonishing. Consequently, on 27 July 2021, he decided to limit these funds to commercial banks with forex licenses. The fallout of this decision further weakened the value of the Naira in the forex market.

The official CBN exchange rate has stood at above 400 Naira per dollar for as long as one can remember. However, this exchange rate differs at the parallel market with a good percentage of margin. By limiting the funds to only commercial banks with forex licenses, Godwin Emefiele was criticized for scraping a system of his creation on the assumption of office.

Controversy with Founder of AbokiFX

Godwin Emefiele made headlines on 17 September 2021 when he called out the founder of AbokiFX, Olusegun Oniwinde Adedotun, for intentionally tampering with the rate of forex on his website, claiming that the exchange on his website was only his creation and represented less of reality and pledged to shut down the website.

A cross-section of those following the development came at him and blamed him for the decay in the forex market. They further asked him to reveal the persons who have contributed to the poor performance of the Naira against other currencies. In conclusion, Godwin Emefiele remains a numero uno as far as Nigeria is concerned.

Although his net worth here may be the most commonly reported, the CBN governor has not refuted or accepted any net worth as of this writing. Hence, what is presented here is only an estimation based on popular opinion. In addition to this, his being linked to some businesses amidst other allegations may or may not necessarily be true in its entirety.

Previous article
Datti Baba-Ahmed: All you need to know about Peter Obi’s running mate
Next article
Pascal Dozie: Nigerian serial entrepreneur who believed in MTN Nigeria when others did not