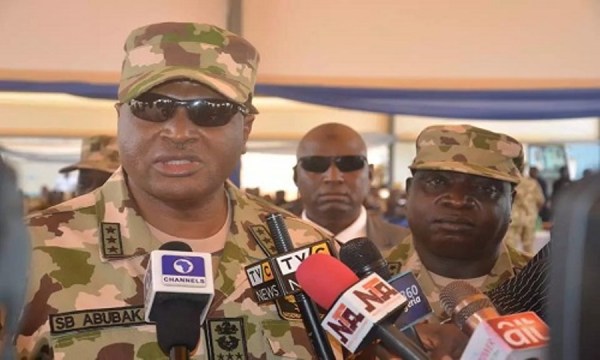 The strategic war room collaboration between the Chief of Army Staff, Lt. General Tukur Yusuf Buratai and the Chief of Air Staff, Air Marshal Sadique Baba Abubakar, officially signposts the final end of all acts of terrorism and insurgency in Nigeria, a security expert, Mr. Terence Kuanum has said.

Kuanum , in a chat with media practitioners in Abuja, said he decided to comment on the security issue in Nigeria after a short break due to the development within the armed forces of Nigeria which is of strategic importance to the ongoing war against insurgency, banditry and terrorism.

He said the development has to do with the war room collaboration among the service chiefs especially between the airforce and the army to wipe out criminal elements in Nigeria and stated that if sustained, would see to the end of Boko Haram and ISWAP terrorism in Nigeria within 90 days.

“It’s not that the armed forces  have not been collaborating before, no; what is happening now which is of strategic importance to the ongoing war against terrorism and the other crimes is that the engagement has been enhanced at the highest level for an almost seamless interaction with the aim of emphasising results  and the elimination of excuses through the shifting of blames.

Kuanum said unlike in the past, when there were noticeable elements of inter agency rivalry, the two men  at the helm of affairs of the army and airforce have through the war room collaboration, being able to forge a common bond that trumps results at the theatre of operation rather than concern about which arm carried out the operations.

“Most of the operations are usualy joint in nature and the current strategy is deliberate to enhance efficiency through harmony. This has been highly successful in the recent past and promises better result in future because it mitigates trivialities and unhealthy competition,” he stated.

The security expert said if the Boko Haram and ISWAP terrorists have any form of intelligence, they should know that the time has come for them to surrender as there is no way they can escape defeat this time.

“Buratai’s coming has highly motivated the army especially with his presence at battlefield and the combat ideas he brought,” the security expert explained.
According to him, “Lt. Gen Tukur Buratai is one of the best in the continent today having been able to lead the Army from ground zero to achieve successes that no nation has ever achieved in the global war against insurgency.”

He further said the air chief on the other hand has also done much to enhance the efficiency of the force in so many ways.

“That is why recently, you don’t hear of insurgents launching revenge attacks on the military as they are want to do in the past. This is because the operations from both land and air exert heavy tolls on them and exterminates their capacity to respond,” he explained.

Kuanum said both the Chief of Army Staff and the Chief of Air Staff have added value to military operations that cannot be ignored.

“In the past, you hear of aircrafts being shot down by insurgents and air officers being captured while in operations, but the current chief of air staff has eliminated all that with the purchase of sophisticated ultra modern aircraft and high level training for personnel.

He said when the CAS was appointed, he ensured the reactivation of 19 aircraft, three helicopters while reactivatimg most of the hitherto, unserviceable aircraft in the NAF fleet.

“He has also acquired 18 new aircraft, 12 Super Mushshak trainer aircraft, four Mi-35M helicopter gunships, two Agusta 101 helicopters, as well as two Bell 412 helicopters, which have been retrofitted to perform light combat functions,” he said stressing that these have fully equipped personnel to go on operations successfully and the work of the joint efforts has been enhanced.

He said Nigerians have high expectations of the military which they must live up to saying the war room collaboration is one of the best ways of achieving that.

He commended the recent success of military operations in Katsina which dislodged a great number of bandits adding more of such instant actions are required to send strong warnings to criminals that they can no longer get away with such crimes.

The security expert said for the service chiefs to achieve better results however, they should like the President said, review their operations and overhaul their strategy against the terrorists.

He said with that, they would  deliver better results that will not only secure Nigeria but also make the people happy once again.