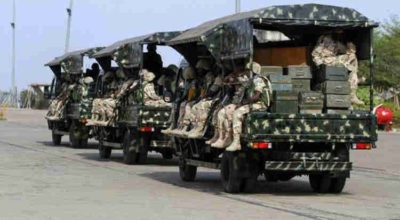 With little or no aid coming from foreign nations, the Save Humanity Advocacy Centre (SHAC) has tasked relevant stakeholders to look inwards to complement the military’s quest to end terrorism, banditry and other criminal vices in the country.

According to SHAC, the solution to the threats posed by the Boko Haram terrorists and other militant groups rest in the hands of Nigerians and not international bodies.

Speaking at a press conference on Monday, SHAC’s Director of Communication, Bayo Ogunseye revealed that “only the Nigerian Military and the Nigerian people have the magic wand to end Boko Haram on our soil once and for all”.

Recall that Chief of Army Staff (COAS) Lt. Gen. Tukur Buratai had suggested that over 90 per cent of kidnappers, bandits, as well as armed robbers, are Nigerians, hence the need for the citizens to be involved in sharing information with security personnel.

While admitting that substantial progress has been made by the troops in the last five years, Mr Ogunseye conceded that homemade approach is the way to go, calling for massive support for the military in its various operations.

He, however, urged Nigerians to desist from insinuating that terrorism is a respecter of ethnicity or religion and work together collectively.

The Save Humanity Advocacy Centre says it is confident that with greater harmony among Nigerians, in no distant time, Boko Haram will be history.

The Centre further gave its firm commitment to the Nigerian state and the military.

Read the full statement below:

As Nigerians, we must admit that we have solicited help from outside the shores of Nigeria towards ending acts of terrorism in Nigeria to no avail. Our hopes and expectations have been dashed severally. Yet, we continued to make appeals to countries and international bodies to come to the aid of Nigeria.

We have received several promises from the international community on several occasions, yet none has materialized before our very eyes. This starkness of the reality calls for concern hence this press conference to let Nigerians know that indeed the solution to the Boko Haram insurgency rest in our hands.

The Save Humanity Advocacy Centre has made this position known in several fora given the dynamics of insurgencies and the role of some external sources in the fuelling of the crisis in the country to their advantage.

Let us make no mistakes or live in an illusion that help would come from outside the shores of Nigeria in this regard. We must have all realized this fully by now and must accept that only the Nigerian Military and the Nigerian people have the magic wand to end Boko Haram on our soil once and for all. This is only achievable when we all rally round the Military by giving it the needed support as they push for the final clearance of the remnants of the Boko Haram group.

We are using the medium to push for a homemade approach that would see massive support for the Nigerian Military in its various operations. This is also cognizant of the fact that indeed our Military has lived up to expectations in decimating the Boko Haram group. This is despite the ignoble role some politicians in the country have been playing towards assisting the Boko Haram group in their nefarious activities in the country.

The Save Humanity Advocacy Centre is saddened by this realization and wonders how we got it wrong in this country that some individuals and groups would be blinded by pecuniary gains to assist in the perpetuation of evil against Nigeria.

We must also admit that the dynamics of the Boko Haram war is such that involves an unimaginable level of conspiracies against the efforts of the Nigerian Military and despite all of these; substantial gains have been recorded mainly in the past five years in the country.  It is thus the considered opinion of the Save Humanity Advocacy Centre that the early we look inwards to address the threats posed by the Boko Haram group the better for Nigeria.

Nigerians must also desist from making a mistake to think that terrorism is a respecter of ethnicity or religion. This can’t be so because we all have been victims of their evil acts as evident in their ferocious attacks on unarmed women and children whose only crime is because they are from North-East Nigeria the epicentre of the insurgency.

This should indeed call for sober reflection from all well-meaning Nigerians, and its high time Nigerians face the stark reality that those emboldening the terrorists/bandits to strike the rest of us must stop in the interest of peace.

The recent attack of the convoy of the governor of Borno State is also an indication that there is a great undertone to the Boko Haram insurgency and why we must all come together to support the Nigerian Military as they push for the final decimation of the Boko Haram group as well as curtailing the activities of bandits in parts of the country.

The attack on Governor Babagana Zulum should also serve as a pointer that terrorists are friends of nobody and not only fighting the Military but the rest of us. They have no friends but see all Nigerians as enemies. This much the International Criminal Court must classify as crimes against humanity.

The Save Humanity Advocacy wishes to state that indeed humanity is under threat with the activities of the Boko Haram group and therefore curtailing their activities should not be left in the hands of the Nigerian Military alone. It is indeed time for all hands to be on deck to support their efforts in our quest to rid our land of Boko Haram and other acts of criminalities.

As sad as this is, the recent execution of humanitarian workers by Boko Haram terrorists must have proven a point to the International Non-Governmental Organizations (INGOs). They were initially undermining the success of the war against terrorism and to teach everyone a bitter lesson that the Boko Haram terrorists are against all of us and will spare nobody once they have the opportunity.

We must learn to be appreciative of the efforts of the Nigerian Military in its various operations in North-East Nigeria and other parts of the country despite the fact in most instances they get overstretched and yet delivering in its core mandate of protecting and preserving the territorial integrity of Nigeria. This is indeed time for us to stand with the Nigerian Military in the onerous task before us as a people and as a country.

The Save Humanity Advocacy Centre is desirous for the end of the Boko Haram insurgency in Nigeria. We are therefore united as a local NGO who have worked for more than seven years in the theatre of war in North-East Nigeria. We shall continue to support the Military as we call on all Nigerians to stand up and do something for Nigeria.

Our pledge remains that the Save Humanity Advocacy Centre would continue to rally the much-needed support for the Nigerian Military in its operations in North-East Nigeria and other parts of Nigeria.

I thank you all for your rapt attention. We desire that this message would get to every nook and cranny of Nigeria, so much so that we shall experience a renewed onslaught against terrorists, militants and bandits wherever they are in the country.

Thank you once again, and Nigeria shall indeed overcome with the active support of all and sundry. 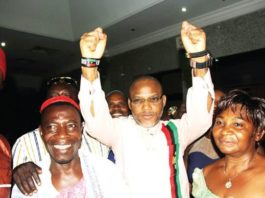 Why we don’t allow naked women wear clothes before breaking into...